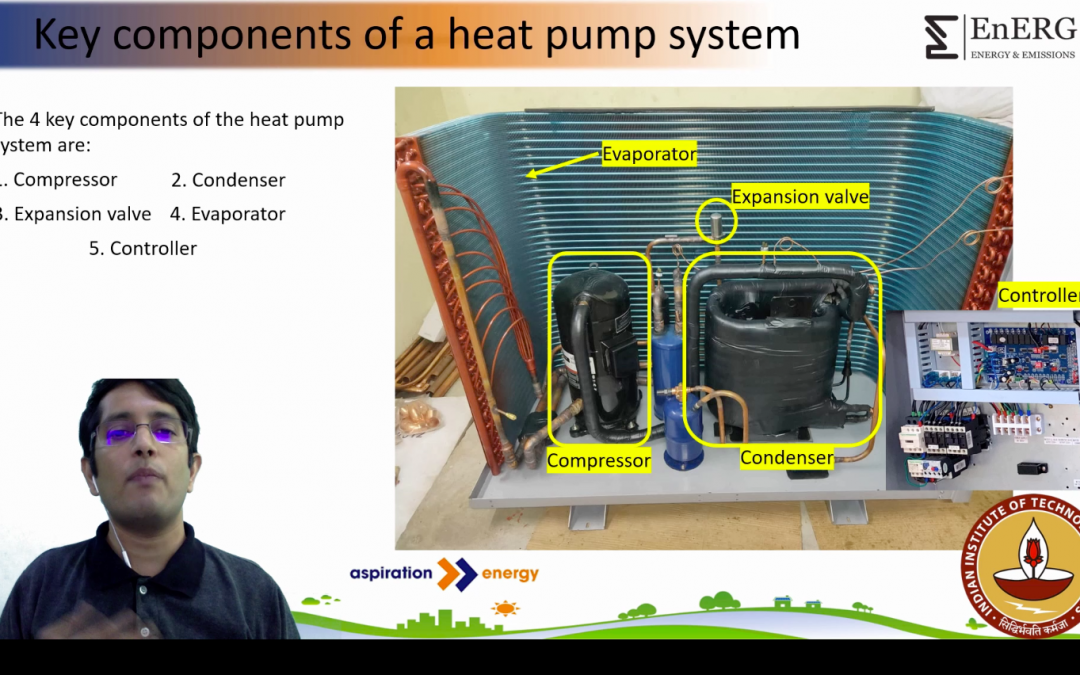 Ever wondered what’s inside a heat pump system that makes it efficiently extract and transfer heat for your use? Watch this second video of our ‘Heat Pump Knowledge Series’ to find out what the four essential components of a heat pump are and their roles in heat pump operation.

Hello all, Welcome back to the ‘Heat Pump Knowledge Series’ presented to you by Aspiration Cleantech Ventures in collaboration with IIT Madras.

In this episode, we will be looking into the heat pump system components and what it takes to build a great heat pump.

For any good heat pump system, there are four key components that govern the design of the system.

COMPRESSOR AND ITS TYPES

When we move on to the Compressor, there are many choices. The first and foremost and the most common one that is used in the heat pump system is the Scroll Compressors. These are available for commercial AC systems which are now being developed for heat pump systems as well. In the range, it is available from 5 tonnes to about 40 tonnes of refrigeration and for heat pumps, single compressor systems are available up to 50 kW of heating and even up to temperatures of 95 degrees C.

For this, the second type of compressors we have is Screw Compressors which are typically a large compressor which are available from a 200kW up to an MW in size and the temperatures of 60 degrees C and these systems become very expensive especially when you start looking at small applications.

And the last one is the Rotary Compressor which is now becoming popular in the refrigeration circles because of its capacity of up to 5 tonnes and its ability to handle temperatures up to 60 degrees C. In the heat pumps, it is not commonly found.

So, we are going into more detail about the selection of compressors for applications, a little later in the video series, but for today, we will look into what the other components of the heat pump system are, to give you a general overview on what makes a good system.

CONDENSERS AND ITS TYPES

The next in series is the Condenser. Of course, there are various options for the condensers just like you have various options for compressors. The Popular one is called Shell Coil. Because it can be easily built and it is also typically tolerant to a lot of impurities in water. It is typically designed for temperatures less than 60 degrees C just like the Swimming Pool Heat Pumps and also where the direct water is used inside the heat pump system. The second and more popular option for the heat pump, primarily for the high-temperature application and also for handling a low approach temperature to give you the most effect out of the heat pump, is the Tube-in-Tube condenser where the twisted coil is inserted into another tube as shown in the figure here and because of the turbulence inflow you can achieve very very high efficiency in heat transfer. However, these systems are quite expensive and also are prone to clogging. So, they are typically recommended only when the impurities in the water can be controlled but nevertheless compared to the Shell coil – which is very compact – Tube-in-Tube can provide an equivalent amount of heat transfer. So, it is very efficient in terms of footprint. The third kind of heat exchanger which is very common in an industrial process is the Shell and Tube which is maintenance-friendly and it can tolerate all kinds of dirty fluids and it can handle large volumes so it can also act as a buffer tank rather than having to use as a separate tank. But typically, these are economical for large sizes – 100s of kilowatts – along with the Screw compressors and it can become quite expensive when you want to deal with prices. The last one is the Plate heat exchanger which is quite popular in the refrigeration system design and it is very efficient and expensive  and of course, having seen the design itself you can understand it’s prone to clogging. So, it needs really good water quality and for that matter, it is typically used in an ‘indirect integration’ type of system where water quality going into the heat pump can be ensured. So we will talk more about these integration  schematics, how do heat pumps integrate with your process plant and all about that in the knowledge series

EVAPORATOR AND ITS TYPES

For right now we will go on to the next component of the heat pump which is the evaporator. So, there are two kinds of choices that you need to make. One is the type of heat pump that you are going to design. So if you have the air source heat pump where waste heat is provided by the ambient air, then you need an air source Evaporator which is basically a fin coil system and this is also something that you could recognize from your air conditioners at home where the evaporators are fin coil evaporators where there is a blower which pulls air through the fins and the refrigerants go through the coil. So, here you have two types which you can see in the image, one is a bluefin which is typically used for tropical places because you need a hydrophobic coating so that water doesn’t stay on the fins. The other one is typically the V shape which is used for large systems because it has a fairly compact footprint.  You have another choice for the heat pump which is the water source heat pump in which case, the same type of heat exchangers which you saw for condensers is also applicable here. Preferably in most applications, the brazed plate heat exchanger is used because it allows you greater control of the temperature of the fluids and it is also compact and more efficient.

Here again, water quality is very important. The most common implementation of a water source heat exchanger for the evaporator is the brazed plate heat exchangers. So, we will go through these designs and selections when we talk in detail about system design.

EXPANSION VALVE AND ITS TYPES

If you have an EEV and all those compressors and other parameters that need to be monitored and controlled, you need to do that with the controller so there are choices of controllers like you see on the screen here.  The most popular and most mature is Danfoss MCX which is fully programmable Danfoss controllers but however, it can cost upwards of 50000 Rs and there’s additional software cost. But nevertheless, it allows the most customization opportunity. It’s suitable for large chillers and the systems where the system cost or the controller cost as a part of the system cost is fairly low. On the other end of the spectrum is the mass-produced generic controllers which are extremely customized for a specific application. So, if it is for an air source heat pump, it is for the air source heat pump and if it is for a water source heat pump, it is for the water source heat pump. So, here the ability to vary is very low. Nevertheless, you do to get it at very low prices and it is suitable for the low-cost heat pumps that it is typically available in the market for specific applications somewhere in between is an Italian company called Karin which allows partly customizable controllers for heat pumps with the costing ranging from 25000 Rs and upwards. These systems allow us to take data from the system and do kinds of processing and allow us for a further understanding of the process and with the various options and choices, we are able to design a heat pump suitable for the application in hand. So, this overview of the heat pump system gives the idea about 4 key components plus the controller which we will look into a lot more detail as we go along.

WHAT’S COMING UP NEXT!

So,  the first deep dive that we need to do is the compressor,

To understand that, we need to look into the compressor and we will start that in our next video where we will do our deep dive into compressor selection.

Thank you for joining and look forward to you joining us in the future.